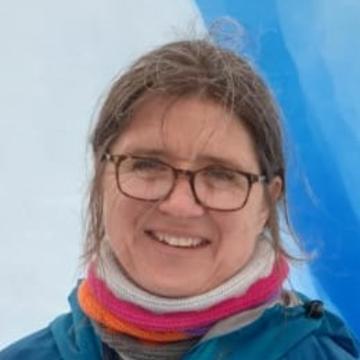 Elizabeth Lewis Williams is a Norwich-based poet and teacher who completed her doctorate in Creative-Critical writing, exploring aspects of scientific and poetic measure in Antarctic poetry, at the University of East Anglia earlier this year.  She is currently working on an immersive installation of a poem for voices, to take place in a mock Antarctic hut, as well as on a book of creative non-fiction called ‘Antarctic Identities’, combining research on the British Antarctic base and field reports, with a more personal narrative arising from her father’s experiences in the far South during the late 1950s and early 1960s.

She is interested in writing about place across time, and the role poetry can play not just in ‘speaking’ place, but in thinking through the complex mesh of cultural, environmental, scientific and personal concerns associated with our perception, and experience, of it.  Her work has been published in ‘The Polar Record’ and ‘Magma’, as well as performed at the Tate Britain, the British Antarctic Survey, the Arts Club, London, and various venues around East Anglia.