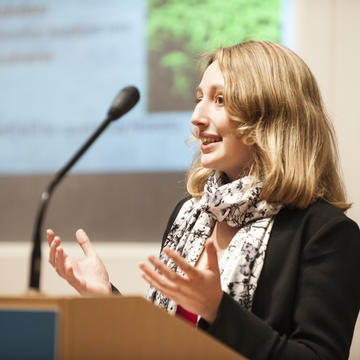 Dr Coraline Jortay is a Wiener-Anspach Postdoctoral Fellow at the Oxford China Centre and a Junior Research Fellow of Wolfson College. She has published on the (re)imaginings of the Japanese legacy in Taiwanese postcolonial and feminist literatures, and on microfiction in contemporary indigenous literature in Taiwan.

Her upcoming monograph project (“Gender as a Linguistic Battleground: Literature and the Pronoun Politics of Republican China”) investigates the circulation of the literary debates that followed the “invention” of gendered pronouns in Chinese in the late 1910s, mapping their afterlives in pronominal re-appropriations in twentieth and twenty-first century sinophone literature, including postcolonial and queer literatures.

A co-founder of the China Academic Network on Gender (CHANGE), she recently co-edited a special issue of China Perspectives, “Re-Envisioning Gender in China: (De)Legitimizing Gazes.” She is also a published translator of contemporary sinophone literature into French (including works by Tong Wei-ger, Kan Yao-ming, Dorothy Tse, and Walis Nokan), with a taste for poetry and short fiction.