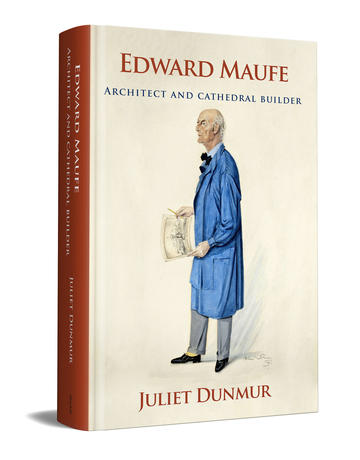 Sir Edward Maufe (1882-1974) was one of the 20th century’s most prolific British architects. His best known work, Guildford Cathedral, was completed in 1962. He also designed many churches and country houses, and made significant additions to Oxford and Cambridge colleges. Maufe was a major architect for the reconstruction of the war-damaged Inns of Court. During WWII he became Principal Architect to the Imperial (now Commonwealth) War Graves Commission, designing British Memorials, including the Air Forces Memorial to the Missing at Runnymede.

Juliet Dunmur is an Oxford University geography graduate, who after working in town planning at the LCC, completed a research degree in conservation and planning. In her subsequent career, she has edited and written for health publications and was a member of the Mental Health Tribunal Service for twelve years, as well as serving a term on the Council of the BMA. Juliet is the grand-daughter of architect Edward Maufe. The completion of Guildford Cathedral was a constant presence in the life of the family, and from her unique position, Juliet provides an intimate and well-researched perspective on the work and life-style of her accomplished grandparents.

The video will be available to watch on the OCLW Podcast Channel.